What Is The Tax-Free Threshold? 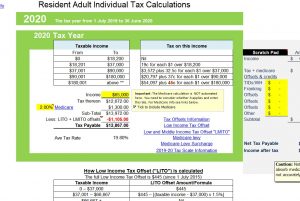 The table below shows the current minimum tax-free thresholds updated to reflect the modified tax rates for the 2019 and 2020 years and beyond in accordance with the currently legislated tax scale. The tax scale is of course subject to future policy and legislative changes.

For individuals, the actual tax free threshold depends on the offsets you are entitled to, the effect of which is to lift you over the first step marginal tax rate. The second table further down on this page shows these higher thresholds when the minimum tax offsets are taken into account.

For non-residents, there is generally no tax-free threshold.

The availability of tax offsets have the effect of lifting the tax-free threshold for those entitled. Pensioners for example, are shielded from tax at higher levels than the basic scale based on a sliding income scale and partnered status.

The Effective Tax-Free Threshold With LITO and LMITO

In conjunction with the tax-free threshold, the Low Income Tax Offset (“LITO”) and for the period applicable, the Low and Middle Income Tax Offset, have the effect of increasing the minimum taxable income taxing point for most lower income earners.

Medicare levy is usually not applicable for taxpayers at the lowest income levels, but shades in for incomes over the minimum threshold.

The following table shows the effective tax-free thresholds for the same years as above, taking into account the low-income offsets, and assuming exemption from Medicare:

Two or more jobs, with total income less than the tax-free threshold?

This means you don’t have to worry about eventually getting the tax-free allowance. But it can be a problem when submitting TFN declarations to employers – because normally only one such declaration may be made claiming the tax free amount. The tax free amount may be more than the income from a single source.

Thus some situations higher-than-required tax is withheld from the wages earned in a second or third job. The employee taxpayer then has to wait until the end of the year assessment to get the tax refunded if total taxable income is not high enough to attract tax.

The Tax Office is aware of this problem, and has indicated that where you are certain your annual income will be less than the tax-free threshold, it is OK to claim the threshold from more than one payer. This is not advice, however.  There are penalties for getting the calculations wrong in your favour, and professional advice is recommended to avoid errors. However if you want to forecast the tax on your annual income use this free annual tax calculator here which has the actual tax rates for the current year.

The effect of inflation is that most things cost more, and earnings tend to rise to keep pace (more or less).  This means that unless the tax scale is adjusted, lower earnings sooner or later end up being taxed at a higher rate, resulting in lower after-tax income after inflation is taken into account.

That is the bracket-creep effect, and gives the Treasurer passive access to higher tax revenues, in the absence of any other adjusting action being taken.

A look at the basic tax scales over the years since 1950 shows an interesting pattern of adjustment for rising incomes. Noticeable also is that personal tax scales many years ago had many more steps than the current scale with 5 levels.

For more analysis on this and an interesting interactive chart of the tax rates over the past 60 years or so, have a look here: Interactive: Income tax & bracket creep – why you pay more tax

Where the current tax rates came from

Rates and thresholds for the 2012-13 years and later were established as part of the “Household Assistance” package announced by Prime Minister Julia Gillard in 2011, associated with the introduction of the carbon pricing reforms.

** A tax reduction which was to apply from the 2015-16 year has since been repealed. See further on this here.

By lifting the nominal tax-free threshold, the stated intention is to relieve lower income earners from the obligation to lodge a tax return and pay tax.

*Separate rules apply to minors and trust beneficiaries, superannuants/retirees and other categories of taxpayer, including seniors, and the actual tax free-threshold in each case will depend on a number of possible factors and circumstances. Seniors and others entitled to other offsets may effectively have a higher tax-free threshold than indicated in the above table.