The purpose of the foreign tax credit offset is to prevent double taxation, where tax has been paid in a foreign country on income which is also subject to tax in Australia.

Offsets are a reduction of tax payable. The foreign tax offset is non-refundable – i.e. the amount of the credit is limited to the amount of Australian tax payable (including medicare levy and surcharge), and any difference is not refunded, nor can it be carried forward to future years.

The entitlement to a foreign income tax offset is provided for and governed by Division 770 of the Income Tax Assessment Act 1997.

The current arrangements for claiming foreign income tax credits have been in place since 1 July 2008. For claims in periods up to 30 June 2008, the Tax Office has guidance here.

In general, the minimum requirements for a tax offset are

The amount included in assessable income is the gross amount, inclusive of the tax paid or withheld.

The offset applies in respect of direct taxes on income, profits or gains (including capital gains), including taxes similar to the Australian withholding tax and any other taxes identified in an International Tax Agreement.

Taxes which are not eligible for a Foreign Tax Credit Offset include inheritance taxes, annual wealth taxes, net worth taxes, taxes based on production, credit absorption taxes or unitary taxes. The meaning and scope of these terms is outlined here (2020).

Written evidence of an entitlement is required to be kept.

By way of clarification in 2010, the Minister has assured Australians working overseas that they will generally not be required to lodge a foreign tax return to demonstrate and claim amounts of foreign tax paid. Normal pay slips identifying relevant amounts withheld will suffice, and would only need to be provided on specific request from the Tax Office.

If claiming an offset of $1,000 or less, you only need to record the actual amount of foreign income tax paid that counts towards the offset (up to $1,000), and enter that amount in the tax return.

If claiming a foreign income tax offset of more than $1,000, a calculation is required, because the foreign tax credit is subject to a cap.

The cap is the amount of Australian tax attributable to the double-taxed foreign income, calculated according to a formula which compares

The difference between these two tax calculations is the maximum allowable offset.

Both tax calculations for comparison purposes include medicare and ignore offsets.

Any shortfall between the calculated offset and actual foreign tax paid cannot be carried forward or otherwise recovered.

Caution: This is a summary of simple circumstances. For more complete information see: ATO guides below.

A tax offset cannot be claimed until after the foreign tax has been actually paid.

In circumstances where foreign tax is paid after the relevant income has been included in a tax return already lodged, the procedure for claiming a foreign tax credit is to lodge an amended tax return.

The amended tax return is for the tax year in which the foreign income was declared.

The time period for this kind of amendment is longer than the normal period, and is for 4 years commencing from the date of payment of the foreign income tax.

Item 20 of the supplementary section of the income tax return form on page 14 (2020) must be completed to include the foreign income and the amount of offset claimed entered at label O. 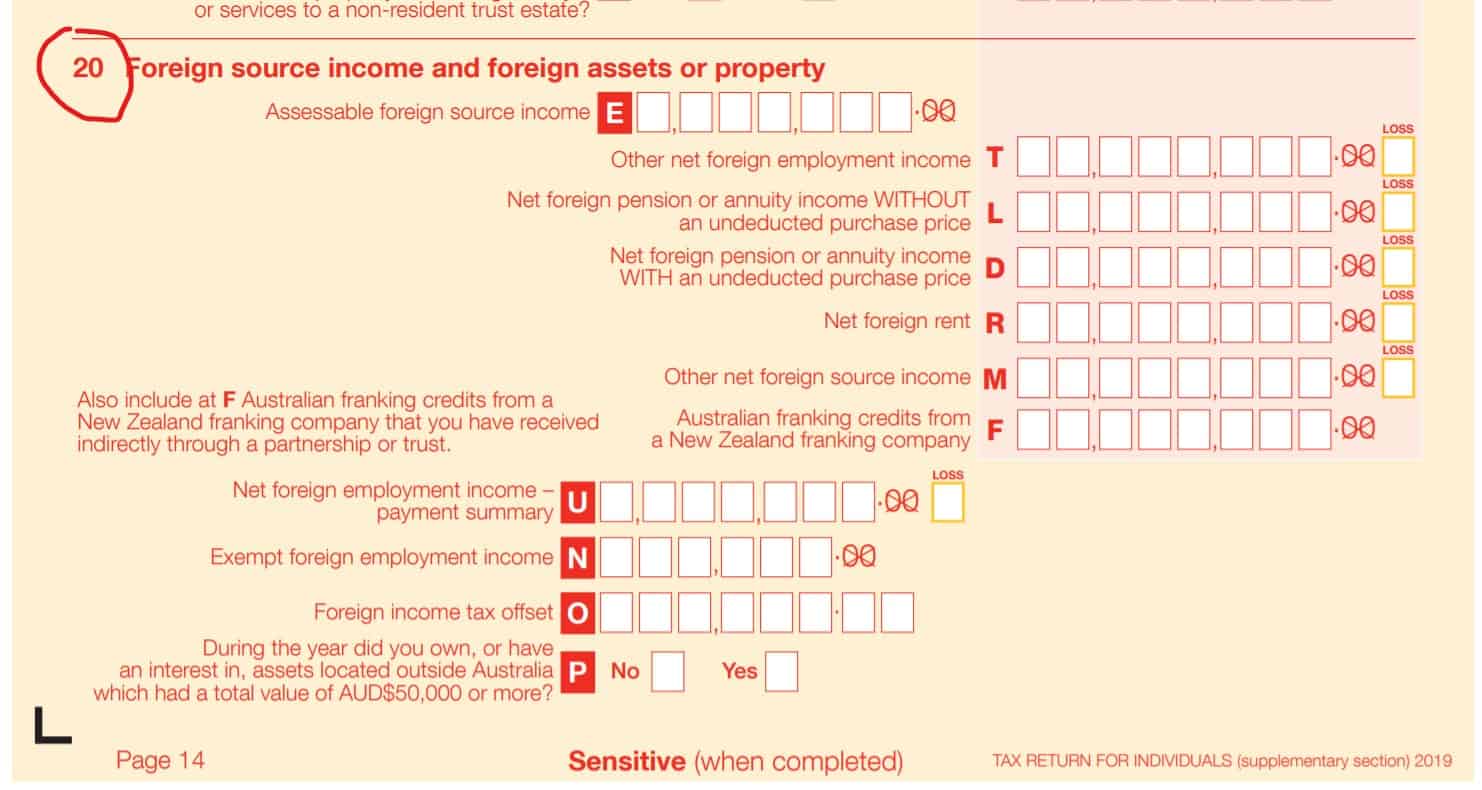