The 2016 Budget announcement contained a proposal for a non-refundable tax offset to superannuation funds, to reduce the tax paid on concessional contributions which are made for or by low income earners.

LISTO is a rebate to the super fund account of the low income member at the rate of 15% of eligible contributions, thus matching the tax on contributions, and up to a ceiling of $500. A minimum of $10 (low amounts rounded up to $10) is payable.

The rebate is paid to the super fund of the low-income taxpayer claimant. 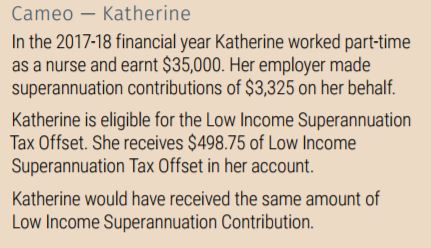 Legislation was passed (in Nov 2016) by parliament to provide a rebate of up to $500 (credited to their super fund) for low income earners with an adjusted taxable income of $37,000 or less.

The amount of the rebate is calculated as 15% of eligible super contributions, which are essentially contributions made to an approved (i.e. “eligible”) super fund.

The necessary conditions are:

Unlike the co-contribution requirements, there is no age limit on eligibility.