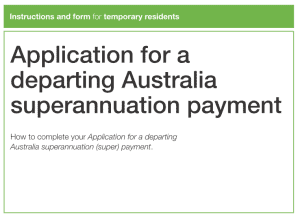 You can get a Departing Australia Superannuation Payment if you were in Australia as a temporary resident (not applicable to visa subclasses 405 and 410) and you have money in an Australian super fund.

The DASP form is available online, see “Applications” below.

To be eligible you must have left Australia and your visa has expired or it has been cancelled at the time of making application. However the Tax Office recommends starting the process whilst still in Australia.

Applications can be made with the Tax Office’s Departing Australia Superannuation form (downloadable PDF) and associated documentary requirements and other information is obtainable from the Tax Office here or..

Applications can also be made online: Start here.

Online application visa check: As of 11 Dec 2017 the ATO no longer requires 14-days to validate visa information with the Department of Immigration and Border Protection, as the information is linked online. If incorrect visa details are shown, DIBP Form 1194 is required.

If your visa is still active, and you need to have it cancelled for this purpose, you can do so by written application to the Hobart office of Department of Immigration and Border Protection.

The Department of Immigration and Border Protection provides a form (Form 1194) and further information about visa cancellations associated with the Departing Australia Superannuation Payments (DASP).

There is a fee for Certification of Immigration Status, but no fee to cancel a Temporary Resident visa.

Australian and New Zealand citizens, permanent residents of Australia, or holders of a retirement visa are not able to claim DASP because they have an option of retiring in Australia and have access to the age pension.

A former temporary resident who has received a Departing Australia Superannuation Payment can apply for a refund of Div 293 tax previously paid or a liability relieved.

The process for obtaining a refund requires the lodgment of Form 74727 with the Tax Office.

Form 74727 and the information requirements are set out here.

From 1 July 2017 the withholding tax rates increased to a general rate of 65% for working holiday maker visa holders as follows:

In a package of measures passed by parliament and after much debate, the government negotiated to reduce a proposed marginal 32.5% tax rate on working holiday maker visa holders (the backpacker tax) to 15% for incomes up to $37,000 from 1 January 2017. Over $37,000 the normal non-resident tax rates (starting at 32.5%) apply. The Employer registration deadline was extended to 31 January 2017. Employers need to issue separate payment summaries (group certificates) for periods before and commencing 1 January 2017.

The application charge for working holiday maker visas will also be reduced by $50 to $390, however from 1 July 2017 the rate of tax on the Departing Australia Superannuation Payment (DASP) is to be increased to 65%. The departure tax (Passenger Movement Charge) is also up by $5.

Tax agents, accountants and licensed financial planners or advisers with an Auskey, ABN and a completed “Agreement for departing Australia superannuation payments” are able to access the Tax Office’s online systems on behalf of clients. See conditions and requirements here.